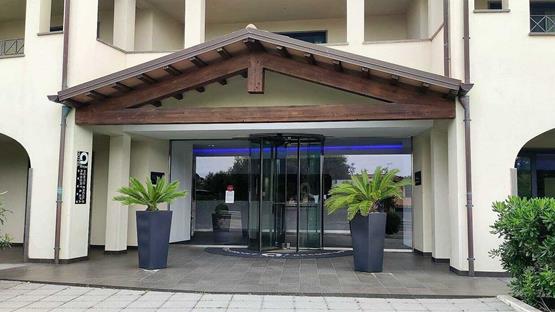 Located on the Monte Argentario, strategically located in one of the most beautiful villages in Italy, Porto Ercole Resort & Spa is a 5 star design hotel with breathtaking views of the beach of Feniglia, one of the most beautiful beaches on the Tuscan coast and of Forte Filippo, the coastal fortification on the top of a promontory overlooking the entire bay of the old harbor.
The exterior of the hotel is characterized by a classic Tuscan architecture: loggias, tiled roofs, porches, reminds the typical image of a village, the clear sandy color identified for the façade highlights the plasticity and makes the mobilization pleasant 'of the prospect with a musical rhythm of lights and shadows.
The complex is articulated in two buildings linked by a covered path through the garden, with typical essences of Mediterranean scrub and lotto, the environment of the coastal dune and the lagoon of Orbetello.
In the building facing the orbetellana road are the common areas: hall, restaurant, meeting rooms, spa, kitchen, service areas as well as part of the rooms; in the building over tramontana other rooms including the large suites with mezzanine and two floors of underground parking.
The tradition and the classical spirit of the outside give way to innovation and experimentation of the interior, technological materials, mirrors, glass walls, led characterize the image that characterizes the structures of the "A Point" group.
Oxidious and white black illuminated by blue reflections Images of water flowing through the windows and mirrors of the rooms recall the colors of the Mediterranean, from the corridors, to the rooms, from the spa to the meeting room from the restaurant to the hall, you lose the delimitation of the space and you floats in a dimension of lights and shapes that accompany the discovery of functions.