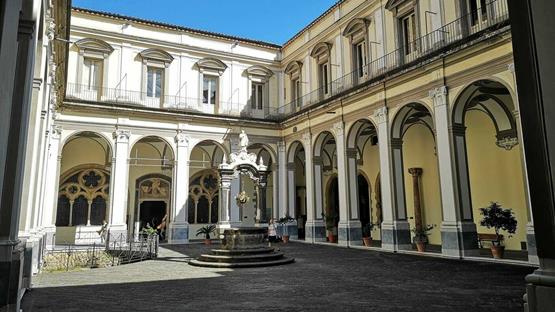 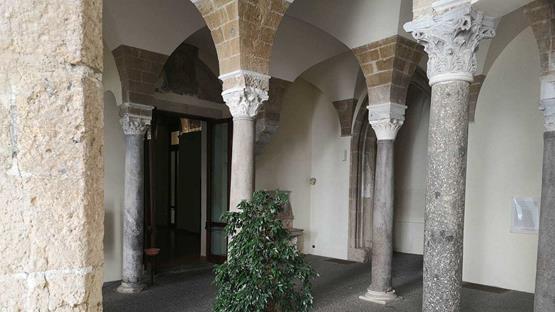 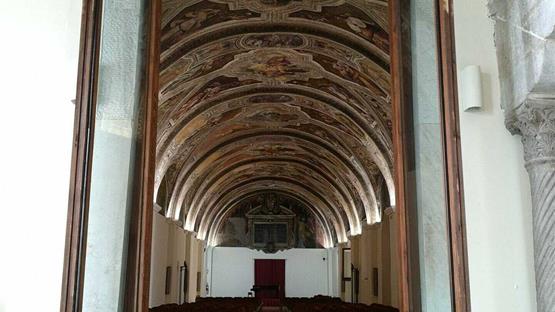 Historical Description
The ancient Neapolis, founded in 470 B.C by Greek colonizers who had previously settled in Cumae, corresponds to that part of the historical centre of the city currently bordered to the north by Via Foria, to the west by Via Costantinopoli and Via San Sebastiano, to the east by Via Carbonara and to the south by Corso Umberto. Within this ancient city, marked by the regular intersection of a network of cardi and decumans, the monumental complex of San Lorenzo Maggiore is located in a special position, where once the agorà (the vital space of the Greek city ,which has later become the Roman Forum) was located.
The square outside the church (Piazza San Gaetano) is now bisected by the decuman of Via dei Tribunali. On the northern side of the square, where the Church of San Paolo Maggiore stands, there was the Dioscuri temple and, at its back, a bit further to the north, the great open-air theatre and the odeon (indoor theatre). The southern side, which partly corresponds to the archeological area of San Lorenzo, represents the com-mercial area of the city. Here once stood a two-story considerable building called the macellum (market): its upper floor coincided with the present elevation of Via dei Tribunali. The building, developed on a rectangular plan, was mostly paved with mosaics and had shops all around, which in turn were sided by a portico. Its perimeter enclosed the area currently occupied by the church of San Lorenzo, together with the 18th-century Cloister of the adjoining Franciscan monastery and its Chapter hall.
In the macellum inner courtyard there was a round temple, the tholos, whose base, along with its three steps once lined with marble slabs, can be partly seen now in the Cloister. Remnants of the mosaic floor date the original construction of the macellum between the 1st and the 2nd century B.C. The upper floor also consisted of shops and other constructions, used for different purposes.
Excavations have allowed to identify the superimposed layers upon which the entire contemporary area developed, thus enabling visitors to see how the various settlements have followed one another during the time, from the Greek to the Roman and from the Mediaeval to the Modern age.
In the macellum area an early-christian basilica was erected and later connected and partly overlaid by the 14th-century gothic church of San Lorenzo Maggiore, restructured in a baroque manner. The bell tower was built in 1487 beside it, people gathered together on important occasions. Between the bell tower and the church, a 15th-century gateway, adorned with the coats of arms of the Neapolitan sedili (quarters), provides the current access to the Cloister and to the monumental complex of San Lorenzo Maggiore.

THE CHAPTER HALL
On the eastern side of the Cloister, flanked by two grain windows, a 14th-century portal leads to an enchanting room with an abundance of frescoed walls and ceilings: this is the Chapter hall, built during the Swabian dynasty in Naples (1234-1266). The fine wall decorations of the Chapter are attributed to Luigi Rodriguez (1568-1609) and were executed mostly in 1608: they depict the order of Fratrum Minorum Conventurum who, in the course of the past centuries, achieved fame for their outstanding religious and cultural merits. Among them, many missionaries,men of letters and some that rose the rank of pontiffs, cardinals and saints.

THE SISTO V HALL
The southeastern side of the main Cloister is flanked by a small Agevin cloister leading to the majestic hall named after pope Sisto V, which was once the refectory of the friars with its 12 metres in width and its 40 metres in lenght. Both the walls and the ceiling are almost intact and frescoed, conveying feelings of solemnity and attractiveness. Also these were the work of Luigi Rodriguez and date back to the 17th century.

The Archaeological Area
Preceeding further down from the Mediaeval level we are faced with an ancient 3-metres wide Roman road, a cardo paved with “piperno” (a resistant type of volcanic tufo from the Phlegraean Fields), exposed for a lenght of 54 metres, upon which stand the remnants of a great variety of shops, such as bakeries,wineries and laundries which in the past animated it.
The grooves used to drain basins of dyeing and bleach provide a key to pinpoint the fullonicae or lancer's dyeworks.
On the far side of the road, the aerarium (that is the tax collectors' office and repository of public funds) has been identified: it is adorned with an imperial style, as doorlintel shows.
The cardo leads to a typical cryptoporticus: this covered space was another market area and shows seven interconnected rooms with barrel vaults pierced by skylights to draw into the air and the sunlight. In these shops it is possible to notice the presence of counters and wall niches for the storage, and of an iron grille that protected windows along the street.
“Consider that our authority, our way of life, our own belongings dwell in San Lorenzo; or rather, I will tell you that San Lorenzo becomes the last resort to escape turmoil due to the presence in this place of the city artilleries, in case it should become necessary to make use of them; the strokes of its bell can summon, in the case of an invasion, all the citizenry.
That is the place where commodities prices are nogotiated, contentions solved, royal prerogatives preserved. Thus the rules decided, and the city agreed; and whathever the city intends to enact, if not perfected in San Lorenzo, is considered to be null and void”
From: Il Forestiero by G. C. Capaccio, Naples 1634.

THE SISTO V HALL The southeastern side of the main Cloister is flanked by a small Agevin cloister leading to the majestic hall named after pope Sisto V, which was once the refectory of the friars with its 12 metres in width and its 40 metres in lenght. Both the walls and the ceiling are almost intact and frescoed, conveying feelings of solemnity and attractiveness. Also these were the work of Luigi Rodriguez and date back to the 17th century