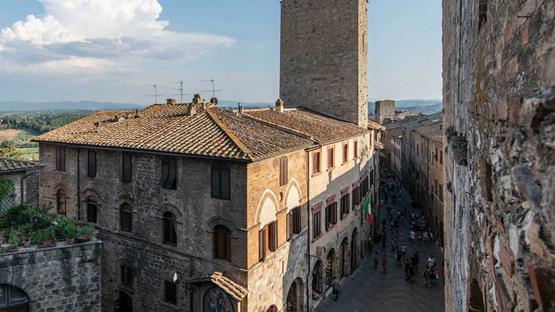 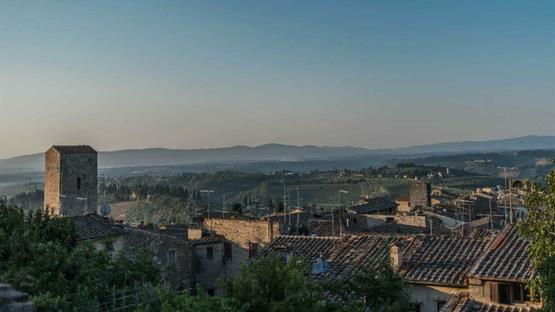 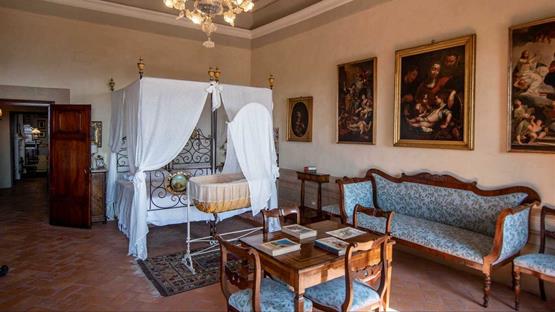 In San Gimignano, one of the famous towers – incorporated within an authentically furnished 18th-century palazzo – evokes the life of the Tuscan middle class of the late 19th century, narrated using sophisticated digital technologies.
Bequeathed to FAI by Lydia Campatelli in 2005.
Of the 72 ancient towers that made San Gimignano famous, only 14 have survived to the present day. Thanks to them, we can still marvel at the unmistakable silhouette of what is the most celebrated Italian mediaeval village of all. The remaining towers include the one that belonged to the Campatellis, a family of Florentine entrepreneurs and landowners who, from the early 19th century, associated their name with the 28-metre-high tower-house erected in the mid-12th century. Today this is the only tower that has retained the original single volume of the construction, being completely hollow inside. The family purchased the entire complex and turned it into an haute bourgeoisie residence that reached us intact, in terms of both its appearance and its atmosphere, thanks to Lydia Campatelli, who in 2005 left the house to FAI on condition that it would be opened up to the public. The residence is rich in narratives, ranging from the history of the mediaeval city to the vicissitudes of an opulent family and offering, in the process, a vivid encapsulation of middle-class life in Tuscany in the period straddling the 19th and 20th centuries, caught between tradition and modernity. The visitor experience begins with an evocative video, projected onto the walls of the attic, that covers the history, identity and legends of San Gimignano, which is now a UNESCO World Heritage Site. Then, on the piano nobile, furnished with original pieces that have been complemented with great care, we enter the daily life of the owners of the house: a world suspended in the past, amid photographs, private memories, objets d'art and collections, including Montelupo pottery and paintings by Guido Peyron – a renowned Florentine artist who was also Lidya’s uncle. A visit to the Campatelli Tower-House is a bona fide journey back in time, set against more than 1000 years of history.