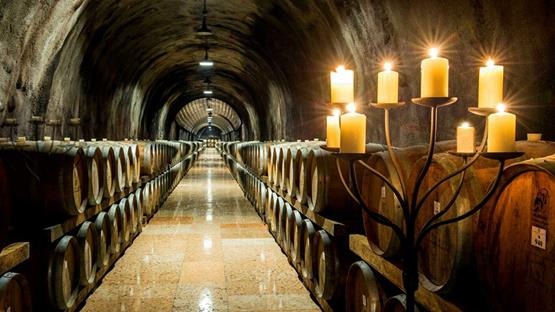 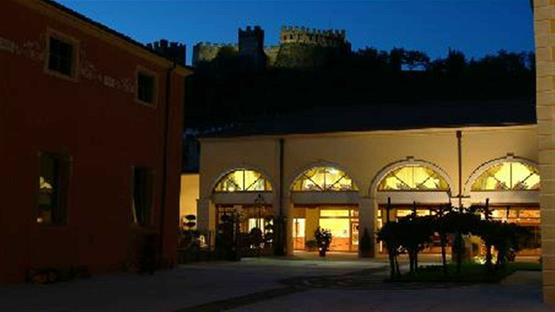 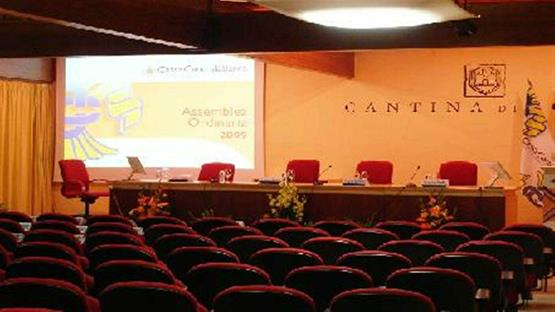 Borgo Rocca Sveva is the result of an ambitious project designed by Cantina di Soave, whose objective was to make transparent, and to further strengthen, the bond between the local area and its entire culture on the one side and, on the other, a particular culture and science, that of wine, that over the centuries came into being and matured. Lying at the heart of a viticulturally-precious zone, and more visibly on the sloping sides of the Castello di Soave, Borgo Rocca Sveva is not only a painstakingly-restored wine cellar but it is above all a uniquely-evocative spot and a privileged centre for education in the culture of wine.

Inaugurated in 2003, Borgo Rocca Sveva is today utilised by Cantina di Soave to testify to its intimate bond with its local area and to represent the high quality of its wines. At a time when so-called globalisation hastens the uniformisation of wines, the reaction of Cantina di Soave, as of other wine producers, has been that of recovering the identity of the product: identifying a wine with a specific area and terroir and then developing and promoting its quality. Borgo Rocca Sveva’s role, then, is to function, not only for the wine consumer but for the general tourist to Soave as well, as a functional sign of how the wines of Cantina di Soave are bound up with their terroirs and with the cultures of their places of origin.

It is not by simple chance that Cantina di Soave’s ultra-premium lines of wines are made here: Equipe 5, the classic-method spumantes, and Rocca Sveva, which in fact gives its name to the entire complex. The Rocca Sveva selection line constitutes in fact the latest high-quality commitment with which Cantina di Soave has rewarded the determination of its partners protect the typicity of the local area, preserving the characteristics innate in the native grape varieties and in their terroirs, and thus displaying a two-fold intent of promoting both wine and area. In this way, Borgo Rocca Sveva offers itself as a cult-place of wine, which all may approach to better understand the culture of the vine and wine.

Winemaking process
The winemaking cellar at Borgo Rocca Sveva, where the Rocca Sveva and Equipe lines are made, is a facility independent of the other cellars. In this building, totalling over 10,000 sq.mt., the grapes dedicated to the Quality Project are vinified, both the ultra-premium Rocca Sveva line and the classic-method Equipe 5 spumantes, which are destined for enotecas and restaurants. The grapes that are brought into Borgo Rocca Sveva are harvested from vineyards managed in accord with the dictates of our Quality Project. At the moment of their arrival at the cellar, their sugar levels are checked against parameters that are set according to grape variety and weather conditions of the growing year, in order to ensure wines of the highest expressiveness.

The cellar where the winemaking is carried out is designed on the “French model,” on several levels. This allows less use of pumps and other machines during the various stage of handling the wine, since gravity is used instead, in a procedure described as “cascading” the wine from upper level to lower; this procedure enables more respect to be shown, during every operational phase, for the original quality of the fruit. Following the fermentation, some wines require maturation in barriques or in larger oak botti, for periods that vary according to the wine type. Amarone della Valpolicella, for example, needs 5-6 years, while classic-method spumantes need to rest in the bottle for 36 months. Thus the Borgo facility is equipped with a barrel cellar and a 2,500 sq.mt.-cave that house the barrels.

The villa
In 2003, the casa padronale, or estate residence, located within the Borgo Rocca Sveva, was restored to its pristine magnificence. The splendid venue boasts a formal hall, tasting room, and rooms for meetings and seminars on wine culture. The re-structuring restored the ceilings; woodwork; the traditional Venetian tiled floor; the staircases in carved tuff; the gilt, wrought-iron Liberty-style staircase; and open-beam ceilings.

Botanical garden
The botanical garden was created with the aim of preserving the traditional local forest. In this area, located on the hill behind the Borgo Rocca Sveva, grow various species of both trees and plants, all representative of the area. There are a full 27 different species of trees and 40 species of undergrowth shrubs. Among the trees are hazel, beech, locust, oak, mountain maple, elm, holly, pomegranate, elderberry, hawthorn, loquat, mulberry and olive. The species of plants include azalea, ferns, lavender, blueberry, rhododendron and red clover. When the weather turns mild, wine tastings are offered here, set in the verdant green of the garden.